Honduras. A country full of cultural and natural richness, with a young population, surrounded by the Atlantic and Pacific Ocean. In spite of all this, Honduras is also seen as a country full of violence and is in need of just one thing: transformation. But, how can we achieve this?

“If my people, who are called by name, will humble themselves and pray  and seek out my face, and turn from their evil ways; I will hear from  heaven and I will forgive their sins and heal their land” -2 Chronicles 7:14

Throughout Costa a Costa, God opened my eyes not only to appreciate the beauty of my home country, but also, to the need of humbling ourselves and seeking Him, knowing that there is no transformation without Him. During the journey I met a lot of people and saw lots of sights, but the one thing that impacted me most was the story of the cyclist with whom I spent most of my time. His name is Josue*, one of the top competing cyclists. One night while we were resting, he let me interview him about his participation in Costa a Costa, but it 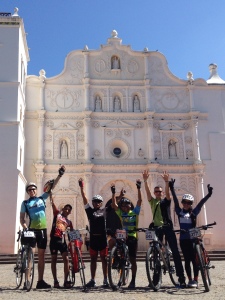 ended up being much more than an interview. This guy opened up his heart about all the things in his life that were holding him down. Josue had worked for 10 years in his hometown as a leader in his local Church, but marriage problems left him discouraged and disheartened and he left the church some years ago. During our chat, I talked to him about the great love of God that covers over everything, in spite of what we have done. Josue believed that God was angry with him and couldn’t forgive him because he had mistreated his family and was at the point of leaving them. The only thing I could think of at that very moment, was the story of Peter when he denied Jesus and went to the Sea of

Galilee; he had betrayed Jesus, to whom Peter had boldly stated that he would be willing to lay down and sacrifice his life for. But he didn’t. What happened? Jesus came to find him, called him out, forgave him and told him, “Peter, on you I will build my church.” I retold this story to Josue with a bit more detail, and afterwards I encouraged him with the hope that Jesus was waiting for him too.

At the end of our trip, I felt that God had used me to be a part of the transformation that Honduras needs. For me, at the end, there was a mixture of emotions, as I’m not only going to be able to tell my friends that I crossed Honduras on a bicycle, but also that I was able to share the love of God and help someone in the battle to transform their life by humbling himself before God, just as it tells us to do in 2 Chronicles 7:14. I want to fight every day to inspire my family, my friends and the young people of UPH that together we can transform Honduras.

*Josue is a fictitious name, changed for this update to respect his privacy