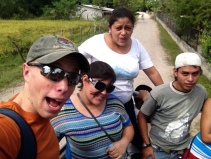 Do you remember the first time you ever drew a picture for your family? What about the first love letter you received? Your first leap of faith? Well imagine all those “First” experiences condensed into one week’s time, and you’ve got a bit of the picture of our end of the year youth retreat with the Youth Leaders (Street Leaders) from UPH.

Last week we spent four days away in Comayagua, one of Honduras’ historically richest cities. It was a time of reflecting back on the year, worshiping, building community, serving, and teambuilding. Our youth got to serve with El Ayudante, a water purification project located just outside of the city. We also spent an afternoon at Cerro De Luz Camp stretching comfort zones through high ropes course elements. My favorite was the “Leap of Faith,” where you literally jump off the top of a 30 foot pole, hoping to catch a trapeze bar located several yards away. If you don’t have much faith in your own jumping abilities, it needs to at least be in the harness attached around your waist!

A special part of our retreat included surprising the youth with a packet of letters from their families. We went around collecting these precious packets from moms, dads, brothers, sisters, and grandparents full of encouragement, love, and joy. For some of our youth, I think it was the first time they had ever received a letter from their parents. There were many tears as everyone got to take the time to soak in their letters throughout the night.  But the story goes back even further than that. The weekend before our retreat, I got to help collect the letters from some of the families. Elizabeth and I went to the home of Leslie, where I met her brother, sister, and grandma. Everyone in the family had already written a letter, except for her grandmother. Asking if she wanted to write one before we headed out, she responded that she didn’t know how to write. I paused reflectively for a moment, remembering that this wasn’t all that uncommon for around here… 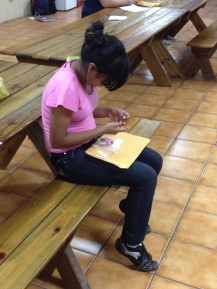 We suggested that she could dictate what she wanted to say, and Leslie’s brother could write it down for her. They went to work. Bryon captured in writing the encouraging words of his grandmother, so that Leslie could later read them on the retreat. There was a lot of space left over at the bottom of the letter, and I suggested that maybe his grandma could draw something for her. Her reply just about floored me. She had never drawn a picture before. Never. Now I really had to catch myself, or the lump in my throat, and my watery eyes were going to stop me from going any further. With the help of Leslie’s older sister, we passed her some markers, and her grandmother began drawing some flowers and stars. She finished by tracing the outline of her hand at the bottom of the page, and we sealed it up, ready to go to Leslie.

This letter, written and drawn with love, was the first time Leslie’s grandma had ever been able to express herself on paper. It turns out that she not only wrote a letter of love to her granddaughter, but she wrote one that hit my heart with unforgettable force. This was a week of firsts not only for our youth, but for me as well- one not easily forgotten.

4 thoughts on “Your First…”